The Gallimimus (nicknamed "Galli") is a omnivore, and one of the most commonly used of the category in-game. It lacks the strength necessary to fight dinosaurs its own size, But what it lacks in strength, it makes up for in speed. It is the fastest dinosaur in the game, a useful trait as it can travel to locations faster and outrun potential predators. This also means they are capable of catching small prey with ease. But because they can choose to eat plants or meat, players that play as Gallimimus rarely hunt, and if they do they primarily hunt baby dinosaurs, or small carnivores and omnivores. They are often preyed upon by the large carnivores such as Giganotosaurus and Spinosaurus. Other predators include Carnotaurus. As for competitors, the Troodon is known to fight with Gallimimus. They can be seen in the swamp location and the valley mostly.

The Adult Gallimimus typically has 500+ health. They deal 10-20 damage per hit. They cost 7 DP and they have three abilities: Natural Collect, which gives the user some materials to build a nest everytime they use it, this cost 50 energy. The second is Speed Stance, which boosts their speed for a very brief amount of time. This is useful for traveling and escaping predators. Third and last is Dinosaur Taunt, which allows the user to gain energy. 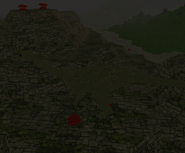 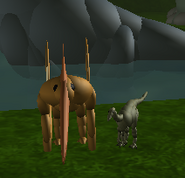 A adult Pteranodon compared to a baby Gallimimus 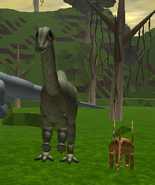 A adult Gallimimus compared to a adult Pteranodon

A adult Gallimimus compared to a teen Therizinosaurus

A adult Gallimimus compared to a adult Brachiosaurus

A battle between a adult Gallimimus and a adult Velociraptor

The adult Gallimimus emerges victorious: Its reward, a fresh corpse.
Add a photo to this gallery
Retrieved from "https://a-dinozaurz-life.fandom.com/wiki/Gallimimus?oldid=4427"
Community content is available under CC-BY-SA unless otherwise noted.