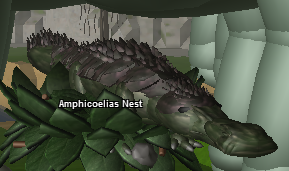 The Sarcosuchus is a large crocodile in A Dinosaur's Life. Most of the time it is referred to by its nickname, "Croc" or "Crocodile", occasionally referred to as a "Sarco". It is fast underwater but slow on land, while also being able to hold it's breath underwater far longer than most. The Sarcosuchus is one of the strongest carnivores because of its health, attack damage, and speed in the water. They have 1200 health on average, making them the strongest carnivores in terms of base health.

The Sarcosuchus is a very strong carnivore, dealing 70 - 80 damage in a hit, dealing 140 damage in a critical hit. It costs 11 DP to play.

Do to Sarcosuchus' reputation as the strongest creature in the game, it is often feared by all of the dinosaurs on a server. The Sarcosuchus is very rarely seen as an opponent by other dinosaurs. When an individual is dumb enough to attack it, their chance of survival is very slim. Sarcosuchus usually see every animal in the game as prey, be it puny Velociraptors or gigantic Brachiosauruses. They usually don't share kills they make, and they often steal other carnivores kills, attacking them until they either flee or one of them dies. The only dinosaurs the Sarcosuchus doesn't usually try to kill or fight are adult Amphicoelias.

Retrieved from "https://a-dinozaurz-life.fandom.com/wiki/Sarcosuchus?oldid=4466"
Community content is available under CC-BY-SA unless otherwise noted.