Start a Wiki
The Triceratops is a herbivore. This is typically the first dinosaur you play in the game since it is the only herbivore that does not cost Dinosaur Points,and herbivores are the only diet group that does not cost Survival Points to join. It eats shrubs and mushrooms. This dinosaur is typically attacked for being weaker than most others. Past infancy they can attack to deal a moderate amount of damage, and are capable of swimming. This dinosaur has been in the game since Legacy. Due to it's status as a weak target and the first playable dinosaur, first-time players will often be irritated, trolled, and constantly killed by more experienced players. This often results in a rage quit. They have many nicknames, including Trike, Tricera, Ceratops, n00b din0zaur, and other (sometimes derogatory) names. They live on land. Despite being said to be weak, they are quite strong and some players fight back against strong predators like the Carcharodontosaurus, and will even defend other herbivores and omnivores against hostile dinosaurs, even sacrificing their own life in the process. Some Triceratops are very territorial, attacking any dinosaur that approaches it.

It is best to live in the plains as this dinosaur,since it is the only area in the game with a reliable source of shrubs. This area is also not commonly inhabited by other dinosaurs,since all the big dinosaurs eat tree leaves,so they have to live in swamps,so carnivores will go there instead of the plains to find their prey most of the time.

A good way to troll people using this dinosaur is to use powerups to increase its attack,and survive until its health is beyond insane,then go on a murderous rampage to show that Triceratops isn't as noobish as everyone thinks it is.

A teen Triceratops compared to a teen Struthiomimus

A Teen Triceratops compared to a adult Struthiomimus

A adult Triceratops compared to a adult Struthiomimus 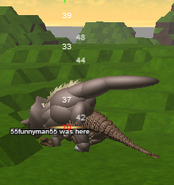 A adult Triceratops battling a adult Ankylosaurus
Add a photo to this gallery
Retrieved from "https://a-dinozaurz-life.fandom.com/wiki/Triceratops?oldid=4422"
Community content is available under CC-BY-SA unless otherwise noted.